I have been a fan of Google Voice typing for a long time. I use it for 2 languages, English and Italian.

Right now instead, Google Voice typing got "smarter" and doesn't care about my keyboard setting, it just automatically detects the language I'm speaking. Of course it gets it wrong most of the time, and that is very frustrating, in particular because when I speak Italian (my mothertongue) it often thinks I am speaking English instead.

So, does anybody know if I can disable this automatic language detection and revert to the old behavior? Or do you have any suggestion on a workaround?

Unfortunately at the moment it is impossible to disable automatic language detection and force the speech to text to interpret spoken words with the language set manually in the keyboard.

Go to Settings app of your phone and choose Google Voice typing option. Inside this you have an option to choose your Default Primary Language, as shown in below screen shot: 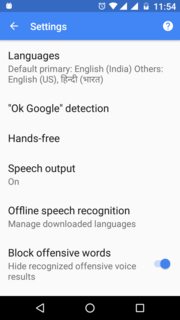 You can chose your Default (Italian) by Press + Hold the language name. Click SAVE and Google voice typing should pick your Updated default Primary Language irrespective of your Keyboard Settings.

This is a two-step process:

Now Voice Typing will not pick up English words even if you wanted it to.