Other methods to unbrick LG X210 from other identical phone?

Recently I accidentally formatted my preloader on my LG X210 smartphone, which is an MTK device (MT6580). Because of this my phone doesn't react when I press the power button, and the screen remains black when plugging it in to charge etc. I guess that's what they call hard-bricking a phone. (and yes, I checked that my battery was still 80% full)

Because it's an MTK device it is still possible to flash the stock ROM by going into meta mode (first install the necessary drivers and then remove battery from phone, keep volume up pressed in and simultaneously insert USB cable connected to computer). I used the flash tool (SP_Flash_Tool_v5.1532_Win) to first format the rom: 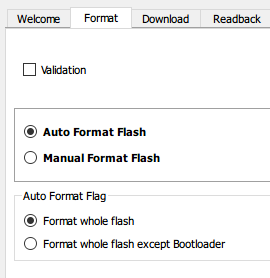 So all I still had to do was:

I searched online and this method seemed to work for a lot of users; i.e. they would then unplug their phone and the device would be able to power up etc. However, in my case it still doesn't... I am very sure that this is the correct stock ROM that I used.

Does anyone know what else I could try to do? Note that I have a second identical LG X210 phone which is still working fine (but it's not mine) - perhaps there is a way to dump the rom and restore it in my phone? (assuming the stock rom itself has a fault in its preloader)

https://www.youtube.com/watch?v=A3TmXtOA0IA is this help maybe ? my phone did react only to show the battery but after you plugin it ask for a signal 1 or 2 second only.you cant see it but you can prove it with usbdeview-x64.zip for example.then you need SP_Flash_Tool_v5.1804_Win.zip and the mtk usb drivers. It was dead but i got it back to work.the links in the youtube video may be outdated but the information was very helpful for me , i did try to flash a custom twrp! but it wasnt for this device and kill the preloader too.

EDIT in the first two second you have to send the correct signal to hold it in the usb contact.