Treble devices not same as A/B devices and vice-versa. Why?

This XDA blog How A/B Partitions and Seamless Updates Affect Custom Development on XDA has some Q&A's, of which :

This is not always the case. The Honor 9 Lite is a prime example as it supports Project Treble yet does not have an A/B partition scheme.

I thought Treble and A/B devices are synonymous in the sense having one implied other. That's not the case

Why is this? What are the differences?

Both technologies have nothing in common, really, so everything is unrelated:

The A/B partition technology is the horizontal separation in the following image, whereas Project Treble defines the vertical separations inside each partition. 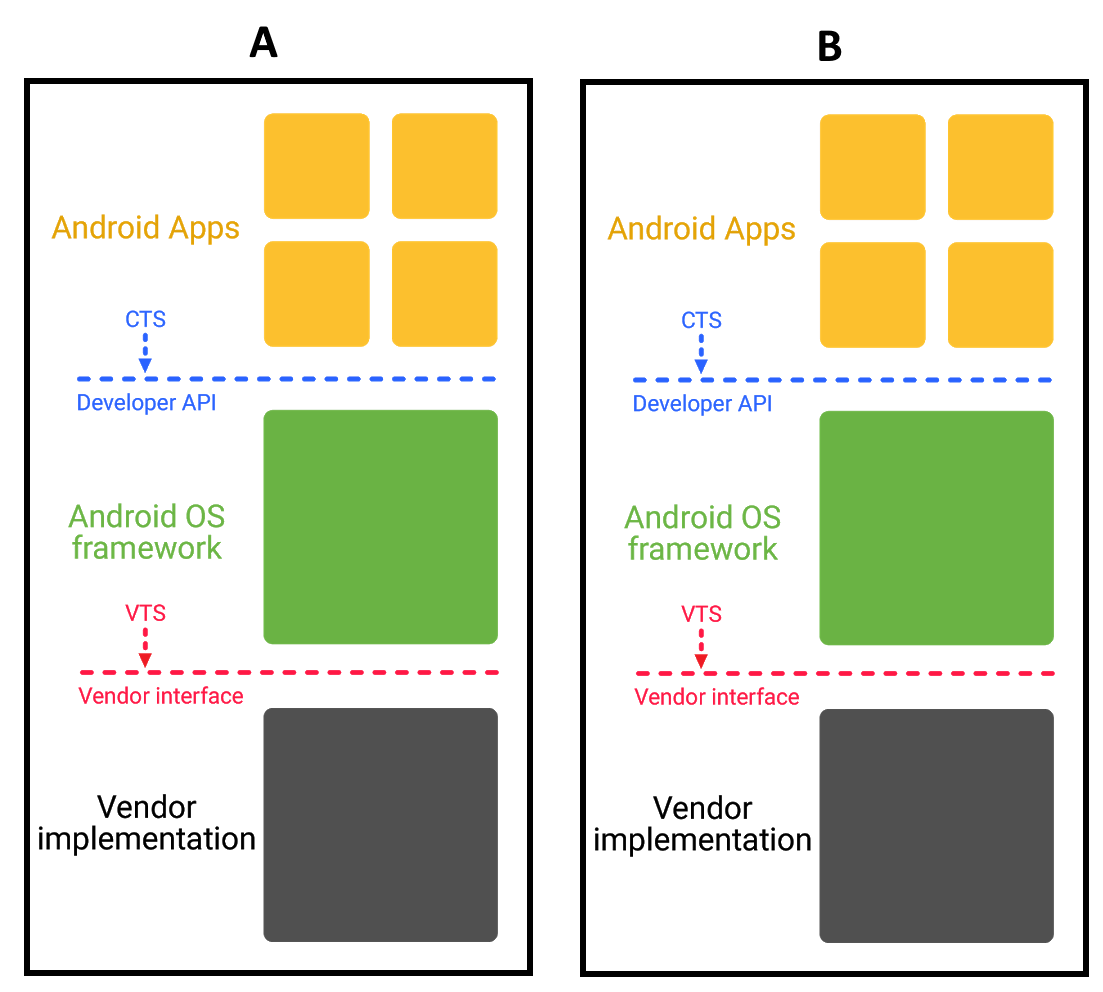 The A/B partition layout does not make any assumptions about the OS that is installed inside the partition, hence it does not matter if the OS is Project Treble compliant or not.

Project Treble applies to the internals of each OS installation and how the different layers within the OS communicate with each other. Hence for Project Treble it is totally irrelevant if there are one, two or many OS partitions. The A/B partitioning scheme is compatible with, but separate from, Project Treble, and vice versa.

Project Treble is targeted to separate AOSP code from vendor code so that each can be compiled and updated independently. HIDL (the communication layer between both code layers: HALs and AOSP framework) was specifically designed to achieve the goal. So now we have necessarily separate system and vendor/odm partitions. It resolved (or tried to resolve) the problem of delayed or no OTA updates from OEMs after device release.

A/B partitioning puts AOSP + vendor code on two identical pairs/slots of partitions (including boot, system and vendor). So that if OTA update fails on one slot, the other one continues to work. Also it makes updating the inactive slot possible while OS (active slot) is running, so doesn't affect user's work flow. This approach encourages OEMs to send more frequent updates, without any fears. As the official documentation states:

This approach reduces the likelihood of an inactive device after an update, which means fewer device replacements and device reflashes at repair and warranty centers.

At design level both are independent of each other (except that both involve partitions). Treble is relevant to OS (mostly userspace) i.e. how running processes from AOSP and vendor interact with each other (includes IPC based on binders). While A/B partitioning replaces the OTA update phenomenon which was previously based on recovery and cache partitions. So it involves necessary changes even to bootloader i.e. the logic: how it boots from different boot/system partitions, particularly after a failed OTA update. Once OS is loaded, A/B isn't of much concern (except when OTA update occurs).

So both innovations address different but somewhat related problems to achieve the same goal: more OTA updates. Also they collectively set the ground for dynamic partitions which let OEMs resize system/vendor/odm/product partitions during OTA updates as the AOSP and vendor code grows or shrinks.