How to remove “Scrapbook Photos” from stock Gallery?

A folder named "Scrapbook Photos" appears in my gallery app, but whenever I try to delete it, it remains. It doesn't contain any items, trying to navigate into the folder simply redraws the main gallery screen.

How can I remove this nuisance? 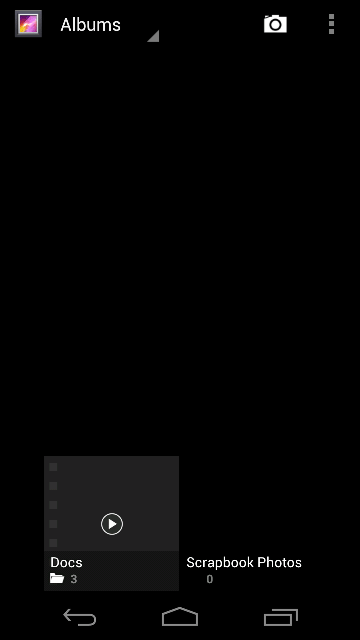 You can delete it at picasaweb.google.com. (Click on the album, and then use the 'Actions' dropdown list.)

That is not an actual folder on the device. It's from your Google++account. It contains the pictures that are displayed next to your profile picture. If you don't have any, it will still show up on your device except it will be empty.

It cannot be removed.

This, and any other, folder of this kind (added automatically to Gallery, without reference to local on-device folder) is always added from Picassa, even if you have never used that service. If you're using newer versions of Android (4.1+) such folders should be marked with small Picassa icon in the bottom-right corner, where you have standard folder icon for yours folders.

These folders are often not editable from the device. I.e. you're saying about deleting this folder over and over again, while I ended-up with more than five such scrap folders without any kind of option to delete either entire folder or any of its contents. What was even worse (and more frustrating) you can have such folders even, if you don't use particular service at all. For example I had a lot of such garbage folders though I haven't activated Google+ and I haven't uploaded anything to Picassa.

The only way to remove such folders is to login to on-line service, it belongs to (Google+, Picassa etc.) and remove it there. In my case, using Picassa (that I have never used before) and remove any garbage Google has automatically added there solved the problem. You should be able to achieve the same, once you login to Google+.

Alternatively, you can disable Photos sync at all, if this is an option for you. But I've heard reports, that this may not help at some certain situations, especially, when source for additional folders is not Picassa, but Google+ or similar service.

I would find the folder through usb mode or a file system explorer such as X-Plore and delete the folder manually. Then it should be removed from the Gallery.