From Galaxy Tab is not being charged through USB Cable

Tablets have larger batteries than phones and may be unable to sufficiently charge from the half amp limit of a USB port, especially while they are fully on (screen on and full speed processor clock).

Some will barely charge if the screen is off but come with high current 5v "usb-like" wall chargers, others use a higher voltage charger on a custom connector - typically something round. Sometimes the "usb-like" ones are actually special cables with extra pins that tell the tablet that a special high-current charger is being used.

The Samsung Galaxy Tab has a loading current of 2 A, but the USB-Specificication only allows 500 mA for the whole bus.

Battery Charging Specification 1.2 released in December 2010. Several changes and increasing limits including allowing 1.5 A on charging ports for unconfigured devices, allowing High Speed communication while supplying a current up to 1.5 A, and allowing a maximum current of 5 A

I don't think the cable is particularly important. Its the jack that the cable plugs into that makes a difference. 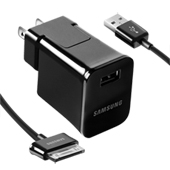 Basically, if the tablet can tell that its plugged into a special (high amp) jack, then the tablet will charge more quickly (at 2A), otherwise the tablet will assume its plugged into a standard USB port and charge at the specification limit (500 mA). The best way to get an adapter that the tablet can identify is to use the official wall adapter. I believe there is no "standard" way of doing this, so different manufacturers may do different things (e.g., using an Apple USB charger may not work).

See How much power does a Galaxy Tab 10.1 charger need to supply?

And Do Samsung tablets have the same USB connector as Apple's iPad?

And Why is charging from computer using USB slower than using an outlet?

Samsung tablets are impossible to charge without the right charger. The charger was given to you with your tablet and if you lose it you have to buy a new one that will fit because there are many chargers that are wide but don't fit into Samsung Galaxy Tabs. So if you don't have a charger you have to buy one or else your tablet will not be charged until you do so.