I know this question is quite common, but nothing I've read so far really helped me. I have a Samsung Galaxy Mini, and had a similar problem with the stock ROM. For some other reasons, I've rooted it and put Cyanogenmod 7 on it. Everything works quite well, but the free space is just eating itself. All my applications are sent to SD card (except facebook, which runs exceptionally slow when on card). And still, I'm only left with 6MB of free internal space. I've cleaned up my SMS messages and browser caches, nothing really helps. I'm showing my storage analysis. The thing that bugs me are the /system and /data partitions. How come that /system has so much empty space, while /data has so little. Isn't it supposed to be a compact partition?

As for applications, I really don't have a lot, except regular GMail, Google Maps and such. Just Opera browser, iGo, Adobe Reader, Outlook and a few apps with less then 1MB. 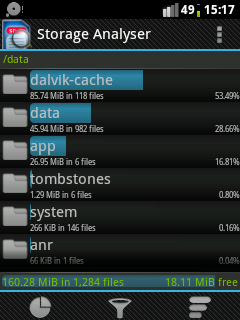 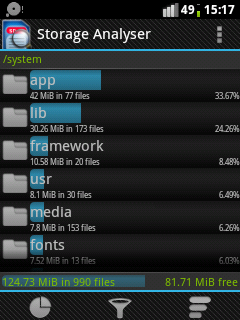 P.S While taking the screenshot, the Storage Analyser is showing 18MB free, But the system is showing 9MB. Nevertheless, both are not enough for normal work.

First a little explanation on the storage (you might also check the tag wiki of the storage tag for a short introduction):

Why can't I use the free space available at /system?

The /system partition holds the often so-called "ROM", i.e. the Android core system (including the pre-installed apps, see bloatware). By default, it is mounted read-only for several reasons (including "security", so no app can tamper with anything here -- and the user cannot accidentally render the system unusable). This is also why a factory reset will present you with a "virgin system": it will not touch this read-only partition.

Being mounted read-only makes it clear you cannot write things onto this partition -- which answers the question why you cannot make use of the "free space" it has. You might wonder why a read-only partition then is not "sized appropriately" -- but it is: it just takes into consideration that additional space might be needed for a system update. Future Android versions might (and most likely will) need more space, also providers might want to add more bloatware...

Why is there so little space at /data?

To put it in simple words: 180MB is all that was left after taking away the ~200MB for /system. The Galaxy Mini S5570 isn't a high-end device. And before you ask: No there's nothing you can do to increase the amount of overall storage available to /data (at least nothing easy -- though some geeks might think of creating a bigger partition on the SDCard and mount it as /data, this is nothing simple and also not without side-effects).

What can be done?

Nothing much. If your device is rooted, you could think of using a bigger SDCard (your device supports up to 32GB), and moving stuff over there with things like link2sd or even Data2SD. You can regularly clear your apps' caches and do some other cleanup. Or you can simply go for a new device which offers more storage (and more RAM, and a faster CPU).

I know it's not very satisfying that a device, just being 2 years old (the S5570 was released to the market in February 2011) already is unable to keep up with daily needs. But unfortunately, 180MB storage (and 384MB RAM) really is not much to play around... So all that currently remains is to refer you to the most faqs of the "insufficient storage" tag to find a solution until you can get yourself a new device. See especially:

Community   2020-06-10 13:47:31Z
谢谢！这是一个非常详细的答案。我不是安卓·努力的陌生人，但这些系统级别对我来说是不为人知的。我知道这是一个非常进入级别的手机，但我认为它至少可以用作智能手机:)。显然，Bloatware是关键问题。并且没有真正优化的应用程序，并且在没有真正需要的情况下消耗空间。我不得不删除股票ROM，因为它完全充满了Android功能，它仍然想要升级。再次感谢你。    Aleksandar Stojadinovic    2013-03-11 17:26:22Z, License: CC BY-SA 3.0
您是对的：Bloatware是一个尤其是在“较低级别的手机”上的关键问题。即使您可以使用Android 4+禁用它们，它们仍然消耗空间    Izzy    2013-03-11 19:02:16Z, License: CC BY-SA 3.0
Thank you! This is a very detailed answer. I'm not a stranger to android, but these system level things were unknown to me. I know that this is a very entry level phone, but I supposed it could be used at least as a smartphone :) . The bloatware is the key problem, obviously. And applications that are not really optimized well, and consume space without really needing it. I had to remove the stock ROM because it was completely full with android features, and it still wanted to upgrade. Thankyou, again    Aleksandar Stojadinovic    2013-03-11 17:26:22Z, License: CC BY-SA 3.0
You are right: bloatware is a key issue especially on "lower-level phones". Even if you can "disable" them with Android 4+, they still consume space in    Izzy    2013-03-11 19:02:16Z, License: CC BY-SA 3.0
-1