How to get rid of update notifications for a given app in Google Play Store?

I have an app X installed on my device in version Y. I don't want to update it to any newer version (Y+z) for some reason. Still, the Google Play Store app always lists updates for X, which keeps me from a simple "update all". My question, put to a single sentence:

How to hide updates for X permanently from the "available updates" list?

First, I know there are alternatives as e.g. the AppBrain Market App, which can handle this quite well (skip this update, skip all future updates). I prefer a "generic solution", which does not depend on a 3rd party's market app.

Second, I know that Titanium Backup includes a "Market doctor", which can be used to disconnect an app from Google Play.1 However, in my specific case that only worked for a few hours: I disconnected GTalk, as I don't want it replaced by Hangouts. The update notification disappeared for a few hours, then it was back. No idea what restored the "link".

Third, just to make sure: I'm not talking about the "auto update" feature as discussed e.g. in How to enable Play Store auto-update for just a few apps?. I was rather hoping for something close to Does the google play store not provide updates for frozen apps?, but without the need to "freeze" the app in question (which I still want to use, but in the version installed, not in a "future version" available).

Fourth: No, uninstalling the app in question is no option here, though it would perfectly hide any future updates from being displayed :) Nor is "freezing", as the app is used regularly.

Fifth: There is a related question for my GTalk example: Do apps included in the gApps zip get updated via Google Play? However, I want the opposite: No update.

It might very well be that "Google Apps" (and other pre-installed apps) are handled in some specific way, and restore their "market links" themselves somehow. For this case, my question includes: How to prevent that from happening?

There's a thread at XDA discussing the very same issue. Until recently, a work-around for "user installed apps" was to uninstall them and then sideload the .apk xe2x80x93 but even that stopped working. Well, re-signing the .apk with a different key might work for user-apps. But both would fail for pre-installed apps (can't sideload them to override; different signature would refuse that install completely).

Moreover, there's an issue filed on this by some "joel.bou..". Not hard to guess, though blanked out: that would be Joxc3xabl Bourquard. If it's really him, then that's really an issue (for those who don't know: Joxc3xabl is the dev behind Titanium Backup). Let me quote from the issue:

For the record: in the Android Market days it was possible to "Attach" or "Detach" apps (on rooted devices) with a system tool such as Titanium Backup. But nowadays (with the Google Play Store app) this has become nearly impossible to do, because the complete app list seems to sync from Google's servers and the user has no control over that.

Which explains why detaching with apps like Titanium Backup is no longer permanent. And I'm afraid I've asked the impossible. But I thought the same in the past with other questions, and surprisingly got solutions here. So I do not yet give up hope on this one!

1: what that does is explained by eldarerathis in this post (thanks to Firelord for digging that up!)

The solution by Craig is actually quite good, and if it somehow can be executed (the custom widget) with Tasker, then things would go very smoothly.

The answer by Anan can also do the job by using pm disable <PKG> in Tasker, but one can't use that favorite app as long as the Play Store is updating the list, which some users wouldn't prefer.

But I've another way to get the things done, not so clean in GUI but good. Here we go:

Note that I've no source to back my claim, it's all personal experience here. You're encouraged to disagree (with evidence), so that quality of this answer can be further enhanced.

Now, back to the question. On my Lollipop, I was able to remove 37 apps from the update list and left only one app for which I used "Update all" to further test the solution. It worked perfectly!

The core is covered. Now, as for the execution:

The app though won't show in the installed apps or update list, but it will definitely show up in "All" under "My apps" in Play Store. I don't use this store much, so I didn't test other settings of it further anymore.

Additionally, you may note that if you've had earlier unchecked "App updates available" under Play Store settings, and you check it after executing the said commands, it will trigger a sync and your changes, as obvious, would be lost.

Also, be aware that Google holds all the info on their servers. So sooner or later, the databases are going to be updated. In my Lollipop device, I waited for around 24 hours and saw no changes in the databases, but YMMV.

It's a theory and I won't claim that it would work but you can try:

Well, I'm not the only one who figured it out this way:

This is an issue for me with a couple of apps as well, specifically a torch flash light app, where the newest version doesn't play well with Lollipop, but the previous version does.

My solution to this in the past was to use Change Droid, but as has been stated above, if you open the play store it can return.

Currently the solution I use is to run a scheduled task from Titanium Back up to detach the app from the market. I currently run this 4 times a day. It runs in the background at the scheduled time and so, when I check the Play Store for updates, it is not there.

I will have to look into it, but there may/should be a way to run the task when the play store is open...not sure.

First you have to create a filter only select those apps that you want to detach. You access this under the menu. You add the "Elements" or apps to the filter, so only the selected apps are affected. Make sure you don't run the detach with everything selected an no filter applied :) 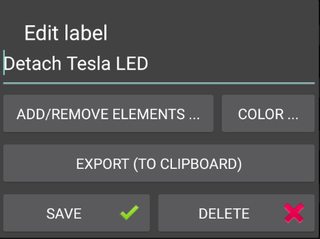 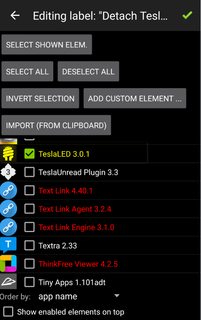 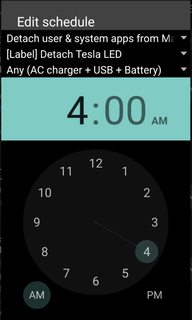 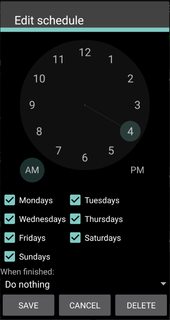 As you can see this is just for one scheduled event m-s, at 4am

When it's complete your scheduled task will look something like this 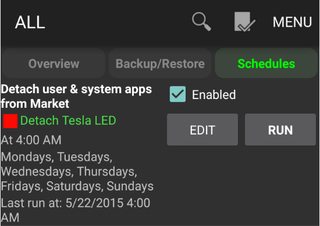 You will have to replicate this and change the time depending on how many times you want it to happen.

Hope this makes it a little more clear. If you tool around TB, I am sure with these screenies, that you can work it out. 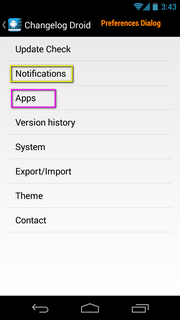 With the following solution:

There is a free app called Changelog Droid (formerly this was a freemium app, now it has full functionality for free). Through it you can manage updates of your other apps, being an intermediary with Google Play.

The advantage is that you can send apps to a blacklist, omitting to show updates temporarily or "permanently" (until you change your mind). You can also follow updates for applications you have uninstalled or you've never installed but want to observe. I accompany this response with some screenshots (identifying with colors the different screen navigation) for you to realize how it works. 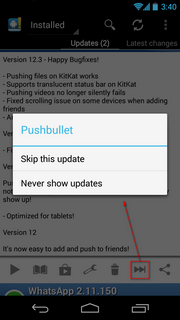 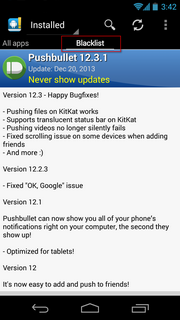 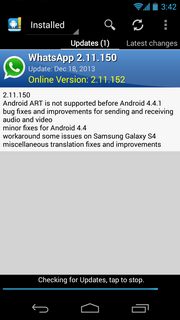 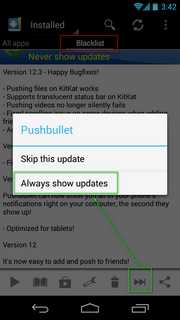 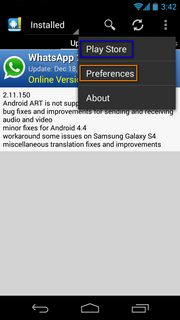 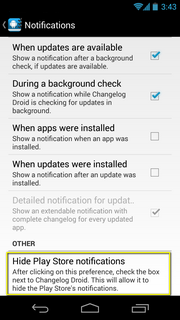 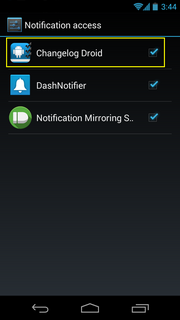 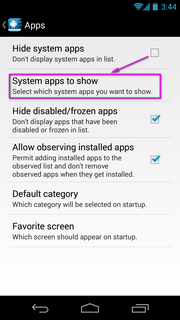 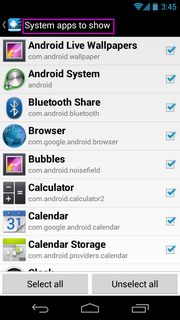 The only downside is that when you open Play Store, either directly or from this app, all apps will be shown (including those that you didn't want to update, as the one applying the filter is Changelog Droid and not Google Play itself, this was expected) 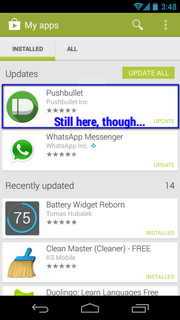 But in Changelog Droid you can access each app on Google Play with a button and then upgrade it individually.

Sorry: there is currently no option to update all allowed applications in one single step from Changelog Droid, but perhaps the developer could implement it eventually.

Note: I still haven't tested for the scenario you describe (I already have updated/replaced Talk/Hangouts), but it could work in your case. Just remember to do not open My Apps view of Google Play so it won't trigger automatic update of apps.

Disable the app in main app settings, or app manager, and open play store and the app shouldn't be listed. Update all and simply re-enable the app when update all is complete. I have the same problem, a txt message app that if I update, I get ugly ads.. This is my work around

I know this is an old thread. And I understand that Ti Backup used to work for detaching an app from Play Store. But I also understand that this works no longer. For those who are interested, I have created an app that does a pretty good job of this. It is called Hide Updates In Play Store, and available for ~USD 1. There is a video showing the app at work. It does require root.

Solution I've found for root users is to simply re-sign the apk (found in /data/app/ or your TitaniumBackup folder after backup) with ZipSigner and reinstall.

I tried using the app "Permission Manager" (have to be rooted I think). I disable a permission that is not important for the app I don't want to updaten (ex. disabled vibrate permission in ES File Explorer and wakelock in Quickpic). Permission Manager recompiles the app, uninstalls the original, and reinstalls the newly compiled app. After I did this, I opened Play Store and the update reminder was gone.

Another candidate just appeared at the horizon. I've not yet tested it, but it sounds very promising: StorePrefs.

Being an Xposed module, it should be able to work around the flaws of the other solutions we've had up to now:

As I have de-googlified my devices and no longer use the Playstore app, I cannot verify xe2x80x93 so feedback from those who can is welcome :)

Like titanium backup you also can unlink the app from google play store with 3C Toolbox. This seems to be, until now, permanent. Root required.