What is the mysterious “CDC Serial” device and why do I needed it?

I've built my own PC computer from parts I purchased online, I did a clean install of Windows 7 Ultimate 64-bit with SP1 (full version, no OEM bloatware), and I ran Windows Update several times to get the latest and greatest updates from Microsoft. I was pleased to see that everything worked as expected, no issues whatsoever, not in software nor in hardware. Next, I connected my brand new Samsung Galaxy S4 Plus (GT-I9506) phone to a free USB port on the computer. Windows detected following 3 different devices. 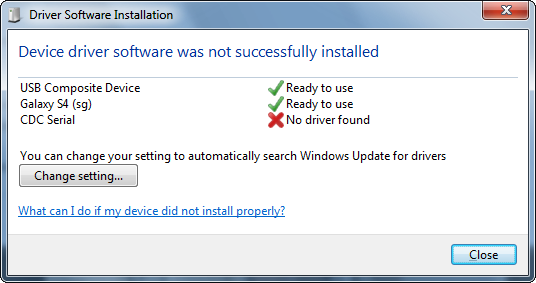 Windows automatically installed and configured the first two devices (see screenshot above). Except the "CDC Serial" device. It didn't install that one.

The very first thing I did was to check the user's manual (the complete manual, not the getting started guide). There is not a single reference to "CDC Serial". I'm not an expert, but I do understand some of this. The "USB Composite Device" is installed so that Windows can communicate with the phone over the USB cable. The "Galaxy S4 (sg)" is the name I gave to my phone during setup, and this is the device that presents itself to Windows as a media player, makes use of the MTP protocol, and this is what shows up in Windows Explorer.

How am I supposed to know what "CDC Serial" is if it's not described in the user's manual? I have never seen that before on any Android device when connected to a PC. I did a search for "cdc serial" on Google and all I could find was people doing some hacks to their phones, like rooting, changing ROM, and generally just hacking it.

So what if I don't want to do any of that? Is it still important to configure the "CDC Serial" device? How does it impact the functionality of the phone, e.g. when syncing data between the phone and the PC, if I decide I don't want to follow those hacking tips and tricks to try to install this device?

I contacted Samsung Technical Support about this and they had no clue what I was talking about. They said they would look into it, but that's it. No help at all.

The user's manual says I can change the USB connection type from MTP to PTP. It essentially makes the phone present itself to Windows as a still camera device. I tried that there were no issues with drivers not being installed. Windows detected only the "Galaxy S4 (sg)" device and it was automatically configured and installed.

In this mode, only picture files can be transferred between the phone and the PC. So this is very limiting, in my opinion. But the "CDC Serial" device was not detected. How so?..

I've never found Windows to be very helpful in identifying drivers either. Here's some information for you on what USB CDC is. According to Wikipedia:

USB communications device class (or USB CDC) is a composite Universal Serial Bus device class. The class may include more than one interface, such as a custom control interface, data interface, audio, or mass storage related interfaces.

Additionally, a resource called the USB Software Resource Center has this overview of CDC:

All of that is developer-speak, but it really just means that a USB CDC driver helps your PC 1) understand what services your phone can provide it and 2) start talking to your phone to use those services. I don't know for sure what service the CDC Serial driver you see represents but I'm pretty confident that installing the official Samsung drivers for your phone would resolve the red X (the drivers that Windows installs automatically are sometimes generic and are often insufficient).

I wouldn't stress too much over it and would install the Samsung drivers if you run into any trouble.